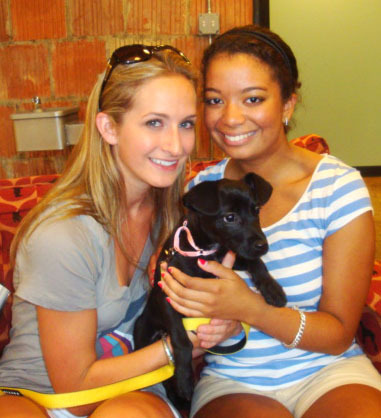 July 17th this year will be spent doing service work to honor Casey’s memory on this first anniversary of her death. The first service project lined up is at  Francisvale Home For Smaller Animals, a no-kill shelter in Radnor, Pa. which has been operating for over 100 years. Volunteers will work from mid morning to mid afternoon painting the interior of their small building. The day will conclude later in the evening for food and fellowship at the Feldman home. Other projects are being lined up in additional areas for those who are not local to the Philadelphia area.

Casey was an animal lover, having everything from chickens, rabbits, guinea pigs, horses, lizards, fish, turtles and of course, cats and dogs while growing up. She was a big advocate of adoption and all of the household pets were strays and adoptees in need of a home. The family German Shepards all came from German Shepard Rescue of Southeastern Pa, which included a beautiful tribute to Casey in their Summer 2009 Newsletter. While at college at Fordham University, Casey would get her “animal fix” and need to give back by volunteering at Animal Haven, a no-kill shelter in NYC. The first puppy that came into the shelter after Casey’s death was named “Casey” in her memory.

Consider joining us on July 17th. View the July 17th event on the Network site at CaseyFeldmanNetwork.org and RSVP. If you are not a member of that site, consider joining. You need not have known Casey personally to become a member. Otherwise, RSVP here in the comment section below or consider your own way of honoring Casey’s memory on July 17th.

Casey’s family, friends, loved ones and those touched by her story look forward to a wonderful day of service to remember Casey.